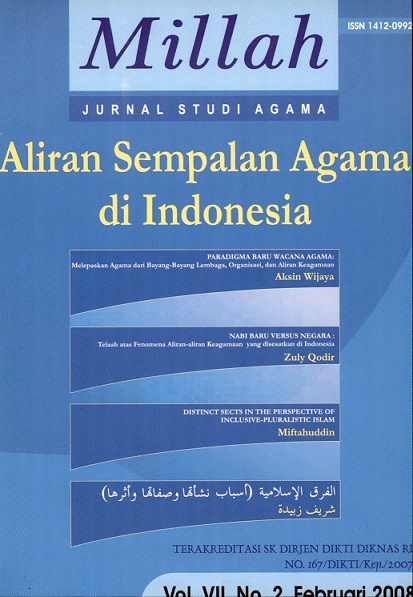 In the end of 2007 and the beginning of 2008, the Ahmadiyah again became an important issue in Indonesia. Similar issue appeared in 1980 and produced a fatwa on it by the Council of Indonesian Ulama. This short paper describes the basic reason why the majority of Muslims in Indonesia oppose the existence of the Ahmadiyah. To analyze the problem, the theory of clustering Islamic teachings is used. Nasr Hamid Abu Zaid, for example, divides Islamic teachings into three levels; the original text of Islam, interpretation, and the teachings practiced by Muslims. Similar theory is formulated by Abdullah Saeed. The result is that the basic reason of the opposition of Indonesian Muslim to the existence of the Ahmadiyah is its belief of the status of Mirza Ghulam Ahmad as a prophet whereas according to the belief of majority Muslim, Muhammad is the last prophet. Therefore, the best way to solve the problem is a declaration or a recognition that Ahmadiyah is out of Islam. This solution has been offered by the Minister of Religious Affairs of Indonesia.