Indonesian Journal of Interdisciplinary Islamic Studies coversÂ various aspects of Islamic studies including, but not limited to:

TheÂ journal welcomes contributions from scholars and researchers of variousÂ disciplinary backgrounds in the form of original (theoretical or empirical)Â research articles.

This journal provides immediate open access to its content on the principle that making research freely available to the public supports a greater global exchange of knowledge. 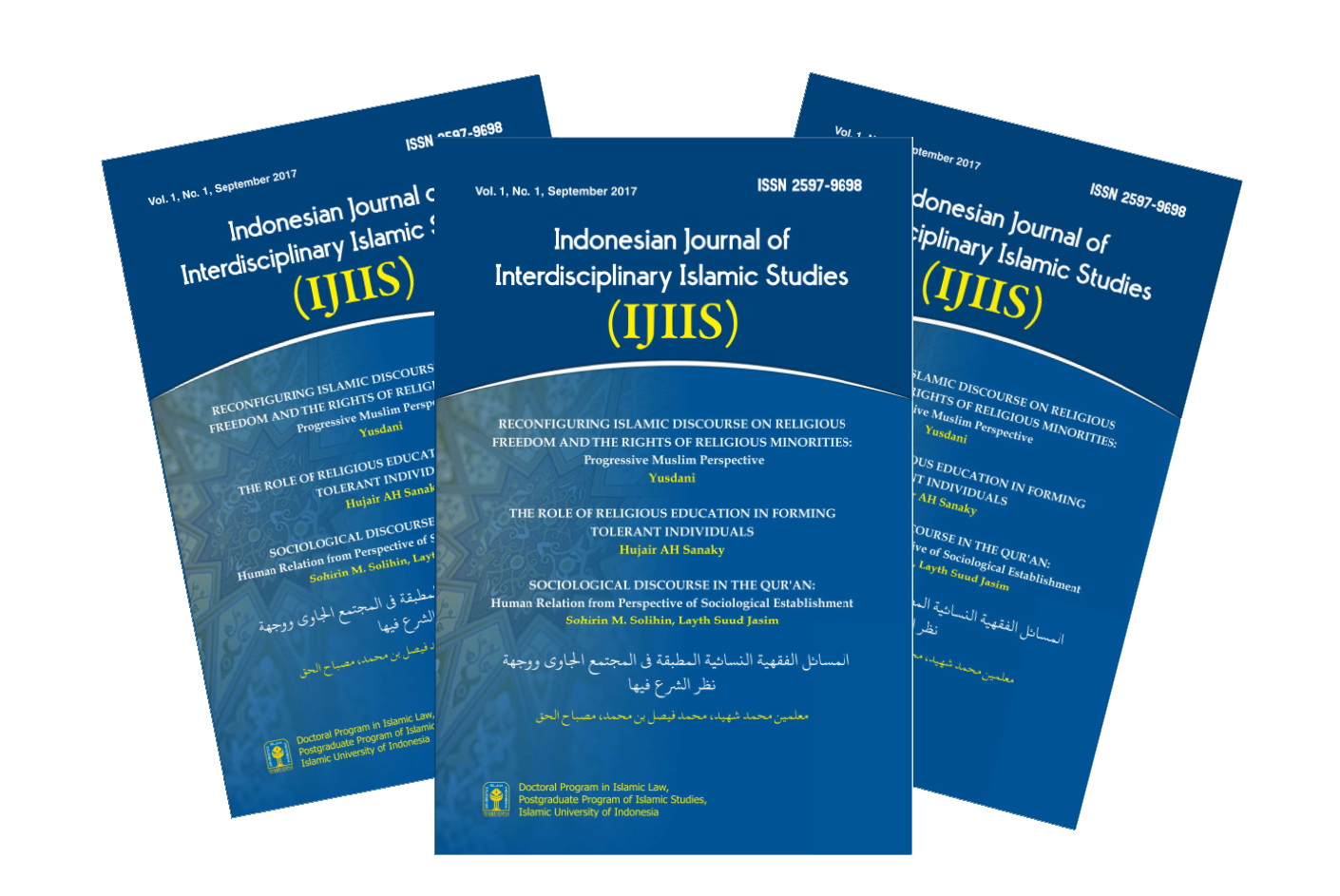 Vol. 1, No. 2, March 2018
Volume 1, Number : 2
February 14, 2019
Issue Description
We are very pleased to present the new issue of the Indonesian Journal of Interdisciplinary Studies (IJIIS). This issue mainly consists of selected papers whose main topics and discussions revolve around the construction, pluralization, fragmentation, and contestation over Indonesian Islam. These papers raise and discuss some important questions over how Indonesian Islam has been historically constructed and re-constructed, and how the nature of religious and political authorities within it has been debated and reconfigured in light of the country’s changing political and religious landscapes as well as global socio-political developments.
The first article, written by Muhammad Abdul Karim, discusses the historical construction and development of a distinctive Indonesian Islam. The second article by Faisal Ismail then critically surveys some defining moments of ideological debates on the relationship between Islam and the state ideology in Indonesia. Following this, Suwarsono Muhammad’s article offers a fresh insight on the fate and trajectory of Indonesian political and cultural Islam in the light of changing political and economic context, especially during the New Order and the Reformasi periods. The next article by Munirul Ikhwan discusses more specifically on how shari’a has been appropriated in the context of modern nation-state, looking at how certain Indonesian Muslim intellectuals develop the discourse of ‘democratic shari’a’. Another important account on how the ideal of Islamic leadership is attached to cultural products is then presented in the next article by by Ganjar Widhiyoga.
This issue also includes another three articles with different focuses. Gowhar Quadir Wani’s article offers some preliminary discussions on Maqashid al-Shari’a while John C. Simon and Stella Y.E Pattipeilohy’s article examines how Mahmoud Mustafa Ayoub’s discourse on Islamic Christology resonates with Christian Christo-praxis. The latest article, written in Arabic by Dzulkifli Hadi Imawan, discusses the role and contributions of Indonesian ulama toward academic and da’wah movements in the Islamic world, especially during the 19th century.
It is hoped that this publication will encourage further research and discussion on various issues concerning Islam and Muslim societies from various disciplinary backgrounds.

RELIGION, STATE, AND IDEOLOGY IN INDONESIA: A HISTORICAL ACCOUNT OF THE ACCEPTANCE OF PANCASILA AS THE BASIS OF INDONESIAN STATE

DANCING WITHIN THE NATION-STATE: AN ILLIBERAL DEMOCRATIC WAY FOR INDONESIAN ISLAM

DEMOCRATIC SHARIA: AN ISLAMIC LEGAL DISCOURSE IN AN ERA OF NATION-STATES 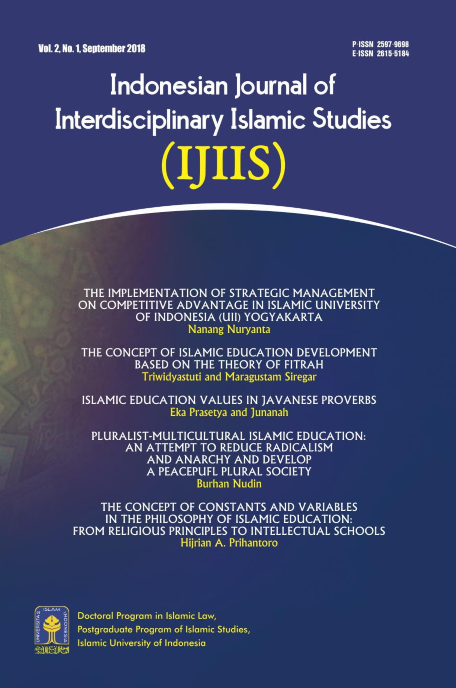 We are very pleased to present The Indonesian Journal of Interdisciplinary Studies (IJIIS) Volume 2, No. 1, 2018. This issue mainly consists of selected papers discussing several interesting and interrelated educational topics such as educational management, educational theories development, Islamic multicultural education, culture and Islamic education and the philosophy of Islamic education. In the first article, The Implementation of Strategic Management on Competitive Advantage in Islamic University of Indonesia (UII) Yogyakarta, Nanang Nuryanta discusses the extent to which the principles and steps of strategic management has been applied by the Islamic University of Indonesia in increasing its competitive advantage.
The second article by Triwidyastuti and Maragustam titled The Concept of Islamic Education Development Based on the Theory of Fitrah then looks at the debate on educational theories or philosophies by offering a comparative analysis on the theory of fitrah and the Nativism, Empiricism and Convergence theories. Following this, Eka Prasetya and Junanah’s article, Islamic Education Values in Javanese Proverbs, discusses how certain Javanese proverbs contain Islamic values and how they can be integrated into three centres of education. Following this, Burhan Nudin in his article Pluralist-Multicultural Islamic Education: An Attempt to Reduce Radicalism and Anarchy and Develop A Peaceful Plural Society, discusses more specifically on the importance of developing a pluralist-multiculturalist Islamic education as an alternative approach in eradicating religious radicalism and anarchy.
The last article by Hijrian Prihantoro titled The Concept of Constants and Variables in the Philosophy of Islamic Education: From Religious Principles to Intellectual Schools, examines the concept of constants and variables in Islamic education. This issue is then concluded by a review by Rafiu Ibrahim Adebayo of the book titled “The History and Philosophy of Islamization of Knowledge: A Preliminary Study of Pioneers’ Thought” by Muhammad Mumtaz Ali. It is hoped that this publication will encourage further research and discussion on various issues concerning Islam and Muslim societies from various disciplinary backgrounds.

THE CONCEPT OF CONSTANTS AND VARIABLES IN THE PHILOSOPHY OF ISLAMIC EDUCATION: FROM RELIGIOUS PRINCIPLES TO INTELLECTUAL SCHOOLS

THE HISTORY AND PHILOSOPHY OF ISLAMIZATION OF KNOWLEDGE: A PRELIMINARY STUDY OF PIONEERS’ THOUGHT