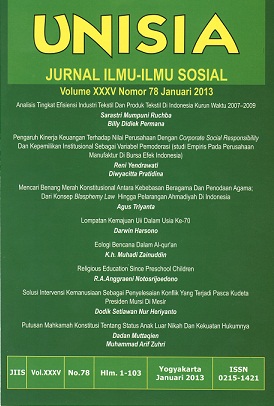 The freedom of expression, of embracing any religion and beliefs as well, which are guarantied by many documents in human rights and constitutions in a lot of countries, including the Republic of Indonesia, finally must be considered as something which is not absolute in nature. The interpretation on the favor of such absoluteness will certainly carry the effects of the freedom and liberty of particultas person or group of people. In this contex, the freedon entails to be proportionally set out in order that such freedom will never violate or humiliate the freedom of others. The case ofAhmadiyyah is the suitable example for it This article seeks to discuss woh the blasphemy law wich applies in modern world indicates the inabsoluteness of the religious freedom.